What Prasa needs to do to survive

Railway engineer and analyst Dr Willem Sprong says the rail network can still be saved, but only just.

With only three months left on their contracts, the Passenger Rail Agency SA’s (Prasa) board still has time and money to fix the failing agency.

Sprong has over 20 years’ experience in the industry. It is not a secret that Prasa and, in fact, the national rail system are in serious trouble. Transport Minister Blade Nzimande appointed an interim board last year with a one-year mandate to change “the state of paralysis” at the rail agency.

Since their appointment, a number of accidents have led to deaths and injuries. Headlines have been littered with sad news as the agency stumbles from one crisis to the next, with system failures common and passengers deserting rail transport.

It is a hard base to come off of, but Sprong said it could be achieved if the board changed its approach to the way it did business, because the state of the railway infrastructure was “very” shocking.

“I’ve been intimately involved with [Prasa] for the past eight years and no maintenance has been done,” he said. “They have had revitalisation projects, signalling projects, but very little maintenance.” Sprong said a “broken window” policy had to be applied where problems were fixed as soon as they popped up.

Asked what could be done, he said the first thing he would do would be to meet metro city councils. “Get them to buy into the concept of the service Prasa renders to the city by transporting its people.

“Town planning needs to work with the organisation, so you do not build a mall on one side and a school on the other side of the railway line, because that just invites people into the rail reserve.”

Community buy-in to help look after the infrastructure was also important, as well as maintenance by Prasa in terms of cleaning railway reserves by removing vegetation and fixing fences. “It’s clear revenue collection has dropped by nearly 50% because people are not paying to use the trains. So, I would secure my reserve and secure my stations,” Sprong suggested.

He said it was time for an overhaul of the entire rail system. 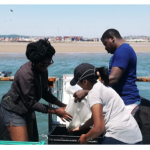